If you turn on a transistor radio, say in your car or your house, music magically appears. You can hear it. The antenna on your radio picked up radio frequencies that are broadcast from either a satellite or a transmitting tower some place. This transmitter puts out a frequency which is instantly picked up by your transistor radio. It by-passes space and time. It passes through steel, brick, mortar, concrete, glass wood because the radio frequency is, at a quantum physics level, smaller than an atom or an electron. It's amoungst the smallest known particles because it is a frequency.
Energy, frequency or vibrations, they are all different words for the same thing.
Frequencies exist, they are real.
Vibrations exist, they are real.
Would you agree that they are scientifically pooven? Despite the fact that these frequencies are invisible to the eye, they are quantifiable and measurable.

There exists in the Human Body a transmitter and a receiver of frequency that is much, much more powerful and faster than any of our external technologies, be they mechanical, robotic or electronic.
It is notable indeed, that there has been very little or next to no research about this that has made it into the public domain, because there has been a vested interest in preventing people from knowing, let alone discovering and experiencing just how powerful a Human Being really is. This awareness and information has been held in the realm of closely guarded secrets. 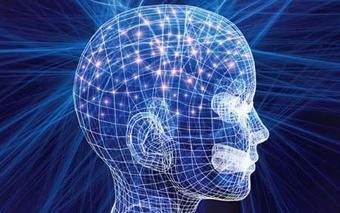 You have a brain in your skull. Outside of your skull you have your mind, which forms an electromagnetic field of energy around your body. It goes by many names, depending on who you speak to and what tradition or part of the world they are from. What it's called or whether you even believe this is true or not, doesn't really matter. There are quatum, physical laws that govern our bodies, minds and brains that, like the law of gravity govern and work whether we believe in them or not. Your belief in them is not required, as they are laws that govern the seen and unseen physical Universe. For simplicity's sake we can even just stick with the fact that you do have a skull and a brain, or you wouldn't be reading this!

According to the two brilliant genius minds of Thomas Edison and Albert Einstein, the Human Brain is both a transmitter and a receiver of frequency. They both independently concluded that the human brain emits frequencies which when focused are picked up by other human brains and/or matter through the ethers, very similar to the way radio waves or wifi work. These frequencies can pass through the same things radio waves do, but according to Edison and Einstein, the frequency of the brain has some very unique characteristics. It's particle size is even smaller, it travels faster than the speed of light instantaneously in the moment and can be picked up at the exact same moment by another human brain / mind / body aura on the other side of the planet, with exactly the same amount of energy. This is possible because unlike radio frequencies, the frequencies from our brains are not limited to travelling in straight lines the way radio signals are. This is why if broadcasting from a satellite you need sequences of satellites to bounce off it to get it to the other side of the globe. The frequencies from our brains have the ability to by-pass time and space in a uniquely Human way.

"The mind is more powerful than any particle accelerator, more sensitive than any radio receiver or the largest optical telescope, more complete in its grasp of information than any computer." - Terence McKenna.

The implications of the reality, if realized, are enormous, but for the sake of this article, this is why distance healing works, just the same as if you were physically present.
In the healing work I do, you are not actually given anything energetically, but rather you are brought into a resonant field that assists what is already within you to emerge, be re-membered or to be awakened into cognitive or body awareness. Everything that is your birthright to be and become is already within you. Nobody can add anything to the masterpeice of perfection that already lies within you. It may just be dormant and awaiting activation and nurturing, that's all. 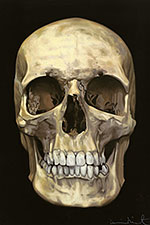 Consider this! Our bones are crystalline structures, comprising mostly of calcite, and they also contain many of the Earth's other minerals. So this magnificent transmitter and receiver on top of our shoulders is actually a large crystal (our skull) that houses the all-important electromagnetic neurochemistry of the brain.
If you feel drawn to working with healing, and awakening the 13 aspects of your Crystalline Consciousness to your Original Divine Blueprint, there are a series Liquid Crystal Skull remedies that are available. Their primary function is to help us unite Thought seemlessly with Feeling. As a Liquid Crystals practitioner, I add one of these crystalline skulls in Liquid Crystal form to just about every remedy I make up for both our household or my clients. 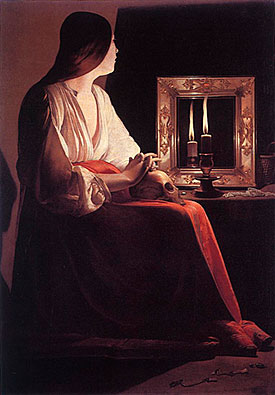 . . . and then there's Womb Consciousness!

A French painting from 1652, by Georges De La Tour,
depicting Mary Magdalene, pregnant and holding a skull in her lap